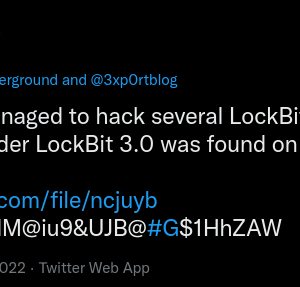 A disgruntled developer seems to be responsible for the leak of the builder for the latest encryptor of the LockBit ransomware gang.

The leak of the builder for the latest encryptor of the LockBit ransomware gang made the headlines, it seems that the person who published it is a disgruntled developer.

The latest version of the encryptor, version 3.0, was released by the gang in June. According to the gang, LockBit 3.0 has important novelties such as a bug bounty program, Zcash payment, and new extortion tactics. The gang has been active since at least 2019 and today it is one of the most active ransomware gangs.

The code of the encryptor was leaked on Twitter by at least a couple of accounts, @ali_qushji and @protonleaks1.

The builder is contained in a password-protected 7z archive, “LockBit3Builder.7z,” containing:

Is the hack real?

BleepingComputer reported that the research team VX-Underground was informed by a representative of the LockBit operation that their infrastructure was not hacked. The representative added that the leak is the work of a disgruntled developer.

The availability of the builder could allow any malicious actor to create its own version of the ransomware customizing it by modifying the configuration file.